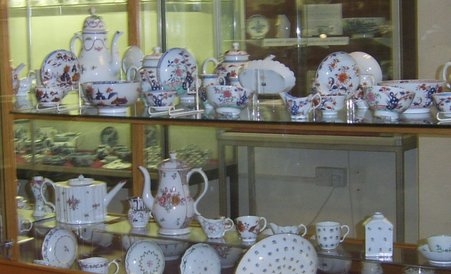 The Lowestoft Porcelain Factory was a soft-paste porcelain factory on Crown Street in Lowestoft, Suffolk, active from 1757 to 1802, producing domestic wares such as pots, teapots, and jugs, with shapes copied from silverwork or from Bow and Worcester porcelain.

The factory, built on the site of an existing pottery or brick kiln, was later used as a brewery and malt kiln.

Most of its remaining buildings were demolished in 1955.

It was in isolation from other centres of ceramic production in London, in the Midlands and in the North-west.

Various aspects of the porcelain enterprise’s origins have been commented on over the years, but it is worth pointing out that they were rooted in a national movement, whereby society developed a sense of growing “politeness” (at least, in those levels which could afford it!) and the wish to display this publicly.

Nor should the rise of what has become known as “conspicuous consumption” be ignored as a contributory factor in the production of soft-paste porcelain. The growth in the manufacture and sale of luxury goods during the seventeenth and eighteenth centuries has been well recorded, with the role of women recognised as crucial – and Lowestoft had a variety of retail shops to satisfy the need to purchase consumer items. Furthermore, tea-drinking, as a polite activity and visible means of cultural expression, was well established in the town by the third decade of the eighteenth century, if the presence of the silver tea-spoons listed in certain of the wealthier citizens’ probate inventories is anything to go by.

Imported Chinese hard-paste porcelain had begun to be brought into Western Europe in increasing quantities from the early seventeenth century onwards, and rising demand for it across a widening range of social levels eventually led to the establishment of European factories such as Meissen and Vienna about a hundred years later. By the middle of the eighteenth century, English factories were producing less technically challenging soft-paste porcelain to satisfy growing home demand.

Thus, in the light of national trends, the establishment of a soft-paste porcelain enterprise at Lowestoft can be seen as part of a wider cultural pattern – not something which occurred in a particular location simply because the physical circumstances there favoured it. Or, put another way, the historical process of cause and effect may be seen to have been at work. This is not to dismiss the combination of local factors out of hand. Far from it. The collaboration of Philip Walker, Obed Aldred, Robert Browne and Robert Williams was crucial in starting and sustaining the venture (especially the input of the first three men named). So was the coincidence and combination of what may be termed “geo-economic” influences.

Foremost among these was the possible presence of suitable, nearby, white clay in the adjoining parish of Gunton – to the north of Lowestoft – the exact location of which has been much debated, but never precisely established (nor has any evidence yet been found of clay being brought into the town from distant sources, either by land or sea). Flint was abundant on the area’s beaches to provide a necessary source of silica in the porcelain’s body, while the third major constituent, cattle bone (burnt and reduced to ash, before use), was in plentiful supply as a by-product of Lowestoft’s butchery trade. This not only supplied the town and its neighbourhood, but was also an important element in the provisioning of trading ships which anchored offshore. Thus, with three of the main constituents necessary to make soft-paste porcelain easily available locally, all that was needed was the motivation to produce it and the technical expertise. The former requirement was to be had from the first two men named in the paragraph above; the latter had to be acquired from the third one and from other, outside sources.

All of this information was taken from Ivan Bunn and David Butcher’s article ‘Lowestoft Porcelain: its origins, factory-site and workforce.'  (Transactions of the English Ceramic Circle, vol. 21 (2010).

Many thanks to Ivan and David 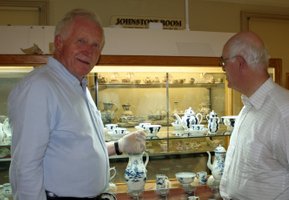